A Postmodern Meditation on the Five Proofs of God

An installation by Mark Cameron Boyd that addresses the quinque viae of Thomas Aquinas and the relationship of language to ways of "knowing." In Summa Theologica, Aquinas introduced "Five Ways" the existence of God could be proved. Twentieth-century scholars have refuted these "Proofs" with various arguments about Aquinas's concepts. Cameron Boyd uses both English translations of sections of Aquinas' text of his "Five Proofs," as well as text by his detractors, to introduce the idea of God's existence in the perfect site-specific location of Salve Regina Hall. 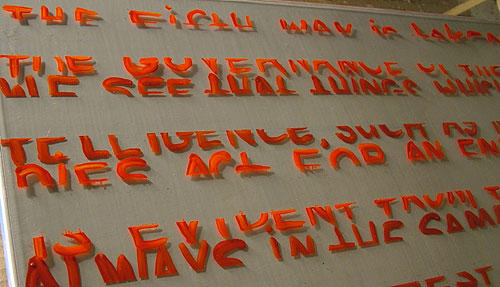 Crafting a Legacy: A Half Century of Art at CUA

This exhibition invited nine artists affiliated with the Art Department, professors and alumni from the second half of the twentieth century, to reflect on the legacy that they have inherited from their time at our university, and the legacy they have to leave behind for others. It combines a wide variety of artistic media, ranging from ceramics and textiles to paintings, prints and sculptures."

Images from the Exhibition: Crafting a Legacy: A Half Century of Art at CUA 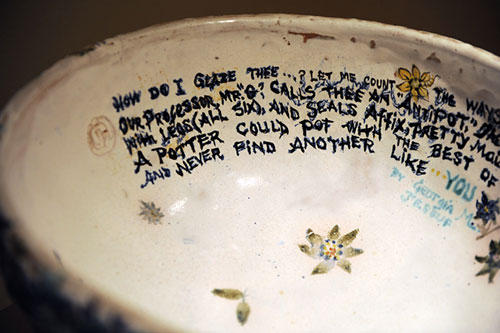 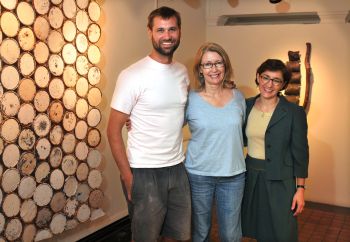 Images from the Exhibition: Mundanity

"Mundanity" looks at sculptural objects that seem familiar in an everyday, mundane sense. Some are made of throw-away materials - paint can lids, garden hoses or cast-off tools; others are representations of common objects, re-made in traditional sculptural materials - a plaster form with gold leaf, cast glass potatoes, a cast iron iron and candy, and wooden limbs.

All of the artists work with the history that objects accrue, uncovering meaning and delight in the quotidian moments and objects that make up our daily lives.